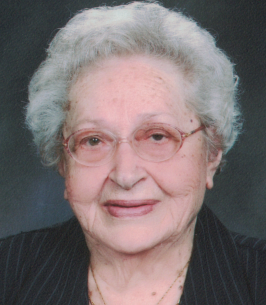 Peacefully, at the Tillsonburg District Memorial Hospital on Monday, October 3, 2022, Rose (Szucs) Arnoczki passed away at the age of 98 years. Beloved wife of the Late John Arnoczki (1997). Proud and loving mother of her two sons, John Arnoczki of Red Deer, Alberta and Andy Arnoczki of Tillsonburg. Cherished grandmother of Jalene, Kayla and great-grandmother of Blake. Dear sister-in-law of Anita Szucs. Rose is also survived by many nieces and nephews in Canada and Hungary. Predeceased by her parents, Steve and Mary (Delbo) Szucs, 4 brothers and 3 sisters. A Private Graveside Service will be held at the Tillsonburg Cemetery. Friends and relatives are invited to a Celebration of Life at the Royal Canadian Legion in Tillsonburg on Friday, October 14, 2022 from 1:00 – 4:00 pm.
Memorial donations to St. Mary’s Church or the Tillsonburg District Memorial Hospital may be made by contacting Ostrander’s Funeral Home, 43 Bidwell Street, Tillsonburg (519-842-5221) who have been entrusted with the arrangements.